What wasn’t said at yesterday’s Senate hearing, but should have been: Free!

At yesterday’s Senate Commerce Committee hearing, numerous senators voiced their support for the Marketplace Fairness Act, which would close a loophole that allows online retailers to avoid collecting sales tax.

Several senators, among them Senator Lamar Alexander (R-TN), said that they were particularly concerned about states’ rights. Under the current system, states cannot enforce their own sales tax laws; the bill would allow states to decide if they want to require online retailers to collect sales tax from state residents. Others cited concerns about simple fairness: Local small businesses—particularly those that sell high-end goods such as cameras, jewelry, and electronics—often serve as showrooms for customers who then buy online to avoid paying sales tax. The inequity is hurting local small businesses across the country.

Opponents of the bill were primarily concerned with the costs and complexity of collection, saying that it would be too difficult and expensive for small online retailers. Several supporters responded that if the bill is passed, more sales tax management services will be created and the market will act to bring down costs. 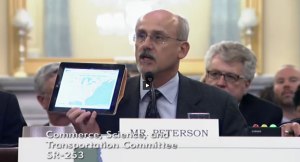 Scott Peterson, Executive Director of the Streamlined Sales Tax Governing Board, testifies before the Senate Commerce Committee, and even shows off to the members of the committee how easy and accessible sales tax has become – that you can even do it on a common device, like this iPad (and yes, that’s TaxCloud).

Which brings us to what wasn’t said: The market has already acted. A completely free sales tax management service is available right now. TaxCloud calculates the sales tax due for any region of the county, collects and remits sales tax, files sales tax returns, creates detailed records of sales tax transactions for shop owners, and even provides indemnification and audit relief—in short, it resolves every concern raised by Senator Kelly Ayotte (R-NH). It does all this at absolutely no cost to the business.

It’s too bad that this wasn’t mentioned by any of the bill’s supporters, because it directly counters opponents’ primary objection to the bill. We don’t have to wait for the market to act to bring down the costs of collecting sales tax. That cost can range from zero to as much as a business wants to pay, depending on the service a business chooses—there are multiple options already on the market today, including Accurate Tax, ADP TaxWare, Avalara, CCH SpeedTax, Exactor, and TaxCloud. Importantly, a no-cost option is already available.

Overall, the hearing showed a great display of support from many senators—and, we were pleased to note, except for only a few instances (which we will resist detailing here), an atmosphere of professionalism, courtesy, and collegiality reigned, even among those who disagreed on the issues.

You can view a video of the hearing on the Senate Commerce Committee website.